New York City always has concerts during weekends, especially in the summer.  Some weekends happen to be better than others, and this is one of them.  From the best up-and-coming bands in Manhattan to an international superstar playing for free, this weekend is all about the music (and space!)

Battle of the Boroughs (image: thegreenespace.org)

Battle of the Boroughs, Manhattan

Find out who is the best up-and-coming band in New York City with Battle of the Boroughs.  Each borough puts on a show with 13 bands and the winner gets invited to the ultimate battle to represent their borough.  On Friday, Manhattan will host their battle to see who makes it to the final showdown on June 29.  The show begins at The Greene Space at 7 p.m.

Artist Tom Sachs has turned the Park Avenue Armory into an incredible space journey to Mars.  Find out all that is needed for survival, scientific exploration and even colonization in outside worlds.  In truth, this cool exhibition has been open since mid-May and is open until June 17, but it is definitely something that I would check out if I was in town to the weekend.

Good Morning America is hosting a free Brad Paisley Concert in Central Park on Friday Morning as part of their Summer Concert Series.  If you’re in New York, head out to Rumsey Playfield in the park or if you’re out of town, just turn on GMA.  The concert will take place live between 7 and 9 a.m.  Look closely and you’ll see one of our buses driving fans from GMA’s Times Square Studio to the park for the show! 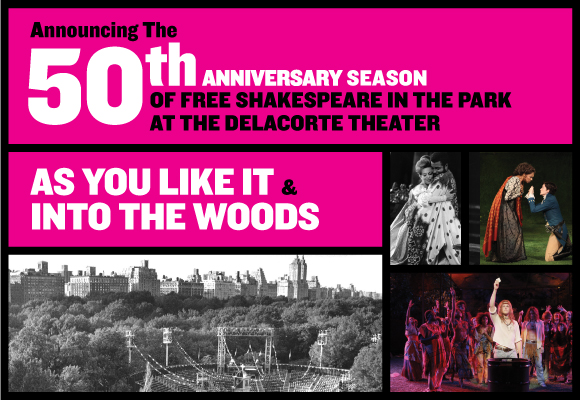 Ah, it’s really here.  Memorial Day has come and passed, Times Square is filling up and standing on a subway platform is worse than sitting in a sauna with a ski jacket on.  It’s summertime in New York City.

Well, almost summertime.  I don’t think it’s fair to say that summer is here until Shakespeare takes to Central Park again, and we’re only days away now.  That’s right, Shakespeare in the Park is returning for its 50th year at the Delacorte Theater on Tuesday.

The first show, which will run June 5-30, is William Shakespeare’s As You Like It, directed by Daniel Sullivan.  The second show, which has been widely anticipated due to its high profile cast, is Stephen Sondheim’s, Into The Woods.  Amy Adams and Donna Murphy headline this show that is rumored to be eyeing a spot on Broadway come summer’s end.  Into The Woods will run from July 23 – August 25.

If you didn’t already know, the best part about Shakespeare in the Park is that it’s free (Awesome ! ).  Tickets are given out at 1 p.m. at the theater the day of the show.  There isn’t much better than seeing Shakespeare in an open air theater, but seeing it for free is the icing on the cake.

This summer, if you plan on catching a show in the park (or any show for that matter), tell us how it is.  We hope to make it out there to catch a show ourselves, but we’d love to hear your opinions.  Drop us a line at klawless@twinamerica.com and we may publish you thoughts!

What’s that, you don’t know what Manhattanhenge is?  Allow me to explain.

Every year, the sun rises and sets due east and due west only twice, on the spring and fall equinoxes.  The rest of the year it rises and sets slightly to the north or slightly to the south.  The streets and buildings of the Manhattan grid are aligned at a 30 degree angle, or in other words don’t run directly north and south.  If they did, than one the spring and fall equinoxes you would be able to see the sun set perfectly down the street.  Since they are slightly off line, the sun sets perfectly through the streets on two random days each year.  Tonight is the first of those two random times.  Follow?

How about this: twice each year the sun sets like this: 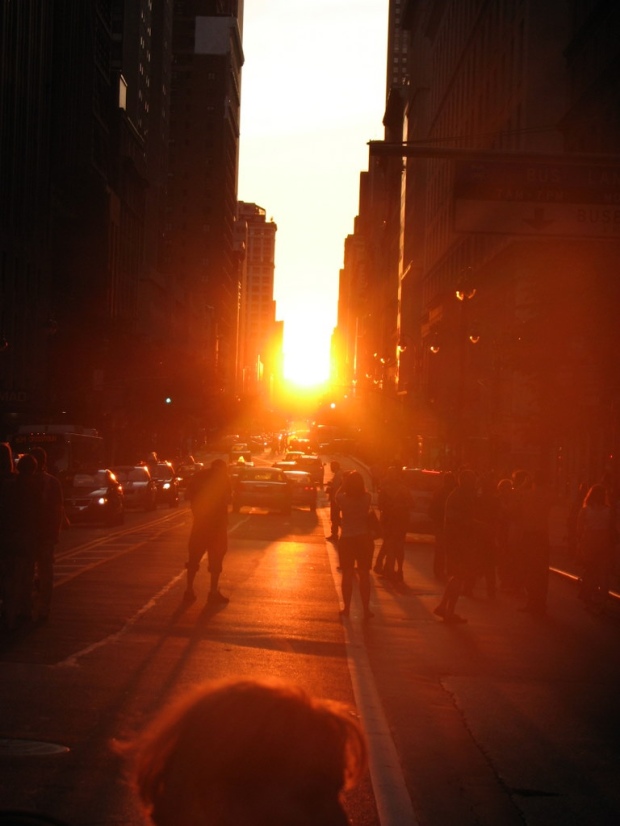 The rest of the time it’s hiding behind the buildings.  It causes a unique effect similar to that of Stonehenge on the equinoxes, which is where it gets its name, Manhattanhenge.

If you’re going to be on our night tour tonight at 8:17 or tomorrow at 8:16, make sure you look at New Jersey and take a picture.  It will be worth it.

For more detailed information on Manhattanhenge or how the sun works in relation to our island, check out the Hayden Planetarium’s website.

(Editor’s Note: This week we waited until Friday to post TWiN, rather than Thursday like we normally do.  What do you say, do you like the extra day to prepare that we usually give, or should we keep posting on Fridays?  Let us know in the comments and vote below. – Kevin)

This weekend we’re giving you a TWiN special Memorial Day edition.  We’ve been covering Fleet Week and Memorial Day for a while now, but one last set of ideas couldn’t hurt, right?  So here you go, This Memorial Day Weekend in New York City:

The Rangers and Devils hate each other, and aren’t convincing anyone otherwise anytime soon.  Right now, the Devils lead the best-of-7 series 3-2, but everybody has known since day one that this series was going the distance.  The Rangers first two playoff series went to game 7.  The Rangers/Devils Eastern Conference Finals in 1994 went to game 7.  The regular season series between the two teams was split evenly, 3-3.  It is in the stars, and on Sunday, we’ll have one more game to play.

Details: Sunday, 8 p.m., The Garden.  If you don’t have tickets, find a nice bar, because with the holiday on Monday, this city will be rocking Sunday night.

Today, the New York Historical Society Museum and Library is opening an exhibit called Beer Here: Brewing New York’s History.  Via their website, the exhibit “will survey the social, economic, political, and technological history of the production and consumption of beer, ale, and porter in the city from the seventeenth century to the present.” Very cool.

We get an extra one this weekend, and we owe it to our troops.  Take the day and celebrate all of the sacrifices that our American heroes (and their families) have made for us.  If it weren’t for our troops protecting our freedom, our lives would be dramatically different.  Below are the suggestions that we have given all week on how to enjoy Memorial Day, but before we get there I have one more. Find a soldier and thank them personally.  They deserve it.

Yesterday the Parade of Sail marked the beginning of Fleet Week here in NYC, and Twitter was ready for it.  By 10 a.m. #FleetWeek was a trending topic in NYC and the pictures started flowing in.  Pictures of the parade were being taken from rooftops, along the river and even from aboard the ships.  Here is our roundup of the best shots from twitter during the Parade of Sail:

For more of our Fleet Week/Memorial day coverage: 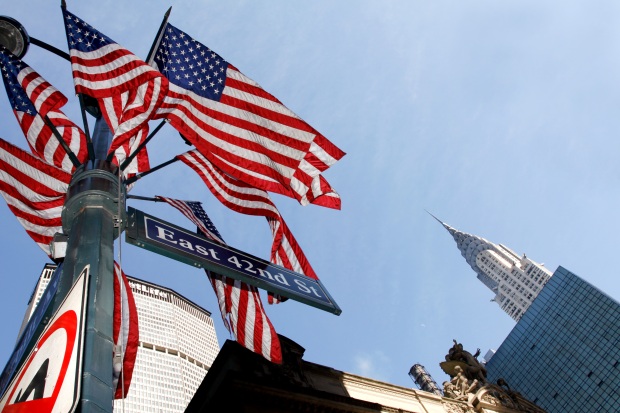 Memorial Day Weekend in New York City is a great time of year.  Fleet week is in full swing and throughout the city you will find great events to enjoy.  Here is our list of some fun events that will be taking place in New York next Monday:

New York Philharmonic and The Cathedral of Saint John the Divine will be hosting their annual free Memorial Day concert.  The concert begins at 8 p.m. and tickets are available on a first- come, first-served basis.  Tickets will be given out beginning at 6:15 the night of the concert.

Unlike many holidays, Manhattan doesn’t have a show-stopping parade that trumps all others.  There is a parade that travels on Broadway from Dyckman Street, but it’s not New York’s biggest.  The Queens Memorial Day parade is reportedly bigger, and the Brooklyn parade has been around for 145 years!

As we’ve said, Memorial Day is right in the heart of Fleet Week, and there are plenty events to take part in.  Check out the full fleet week schedule on their website for some fun ideas.

Here is some of our recent Memorial Day coverage: 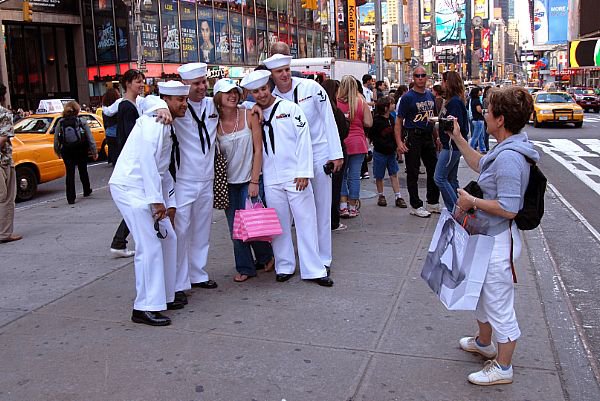 We’re just two days away from the start of Fleet Week 2012 here in New York City.  The first event of the week is known as the parade of sail, which is pretty much what you would expect it to be; a parade on the Hudson River.  Tall Ships and Warships will glide in from the south and up the Hudson River beginning at 8 a.m., but that may be a little deceiving.  According to the Fleet Week website, the first ships won’t reach lower Manhattan (World Trade Center) until 9:27.  Here is the total schedule for the Parade of Sail Wednesday morning:

Make sure you plan accordingly.  No need to find a spot along the Husdon an hour and a half before the first ship passes by, right?  Follow the link for a full schedule of Fleet Week 2012 events.  Don’t forget, all uniformed military ride our buses for FREE during Fleet Week, so stop on by!