Where is the best place to see a movie in NYC?

Sometimes you need to take a break from the hustle and bustle of sightseeing in NYC. We get it, we live here. We know how crazy it can be and we know that sometimes if you’re visiting NYC, the best way to get away from it all is at the movies. Take a couple of hours, buy a jumbo popcorn, and relax. It will be just like home. After all, once you’ve been to one movie theater, you’ve been to all of them, right?

Do you have a favorite theater in NYC? Tell us about it on Twitter at @GrayLineNewYork

With contemporary hits like The Book of Mormon and long-running staples like The Phantom of the Opera, it feels like Broadway is as exciting now as it ever was. But that doesn’t mean you should limit yourself to the “veteran” shows on your next trip to New York City . Instead, why not check out these brand new shows on the Great White Way?

Most people are familiar with Romeo and Juliet, but chances are, you’ve never seen a production quite like this, which stars Orlando Bloom (Lord of the Rings). According to its producers, “In this new production, the members of the Montague household will be white, and the blood relatives of the Capulet family will be black. While race defines the family roots, the original cause of the ‘ancient quarrel’, passed down by successive generations to their young, has been lost to time. Shakespeare’s original dramatization of the play sets the two young lovers in a context of prejudice, authoritarian parents, and a never ending cycle of ‘revenge.’ Against this background, the strength of their love changes the world.” the play is set to open on Thursday, September 19, 2013 at the Richard Rodgers Theatre

Based on the Oscar-winning 1976 film, Broadway will be “knocked out” by the new adaptation arriving from its run in Germany and will open in New York on February 11, 2014 at the Winter Garden Theater. This unique musical will be composed by Lynn Ahrens and Stephen Flaherty. Thomas Meehan who wrote the book collaborated. Fans of the movie can rest assured that they will get a piece of the Academy Award winning film, as Sylvester Stallone will help produce the stage production.

Based the novel by Daniel Wallace and the 2003 Colombia Pictures film starting Ewan McGregor, this fantastic and whimsical new musical centers around a young man whose father is dying. He tries to learn more about his dad by piecing together the stories he has been told over the years. The show will be directed and choreographed by Susan Stroman (who also did hits such as Contact, Crazy for You, and The Producers), with music and lyrics by Tony nominee Andrew Lippa (The Wild Party, The Addams Family). Opening night will take place October 6th, 2013 at the Neil Simon Theatre.
With all the great shows new and old, what are you planning to see this fall?

Author Bio: Alisa Vilabrera is a blogger for CheapOair. A leading travel website offering a large selection of discounted flight deals, hotel rates and car rentals. You can get information on TravelTrends from CheapOair by signing up

Christmas is just too good of a feeling to only experience it in the winter. You don’t have to wait until December; only in New York can you watch the Rockettes at Radio City Music Hall this summer on August 13th! The “Christmas in August” celebration of the 2013 Radio City Christmas Spectacular production will make you feel like a kid again, and the only thing missing is the snow. The breathtaking performances by the Rockettes begin at 11 a.m. in Times Square. Radio City’s Santa Claus will be in attendance too coming straight from the North Pole to the Big Apple.

It gets better! We’ll be sharing the Christmas spirit too. The Rockettes will be traveling around NYC on our Gray Line New York red double decker bus! Fans will be able to see them as they stop by several locations including Radio City Music Hall, Bryant Park, Madison Square Park, the Beacon Theatre, Union Square, and Park Slope.

So bring the family, and enjoy the holiday season in the summer heat! But remember to tell the kids to save the wish list until December!

The Tribeca Film Festival has, in its short existence, become one of New York City’s premiere celebrations of the arts. Filmmakers from around the world diverge upon lower Manhattan to share in their passion of the movies. On April 17th, the Tribeca Film Festival is back for its 11th year, and it is setting up to be another great one.

Here, we put together everything you need to know about the 2013 Tribeca Film Festival.

When is the Tribeca Film Festival?

How to get tickets for the Tribeca Film Festival?

There are three ways to go about getting tickets

What films will be showing at the Tribeca Film Festival?

Here is a link to the Tribeca Film Festival Film Guide. It includes every movie that will be screening, including films making their world premieres as well as classics like Beetlejuice.

Where will the films be shown?

The Tribeca Film Festival has viewings at several theaters throughout NYC, primarily in the Lower Manhattan neighborhood of TriBeCa. Check the film guide for details about what is playing where.

Should I go to the Tribeca Film Festival?

Absolutely! Even if you just go for one film or one talk, it is definitely worth taking part in. Here is a story from last year’s festival that is sure to make you smile.

For more information on the Tribeca Film Festival, visit their official website. 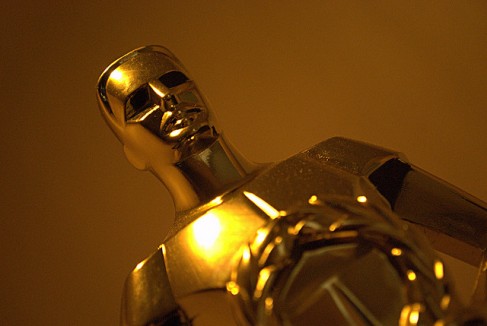 Can’t wait till the Oscars to talk about your favorite films? Then join us Thursday at 3:30 EST for a special #GLNYchat about the best NYC films.

We’ll be joined by special guest-host On Location Tours to discuss all things about films and New York City. So join #GLNYchat on Twitter this Thursday at 3:30, movie buffs! 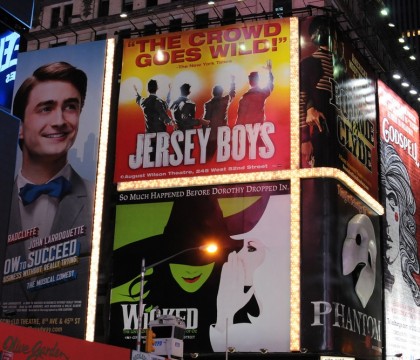 Annie! Lion King! Newsies! Phantom!  We’re yelling through your computer screen because we are so excited that Broadway Week is back!

Broadway Week 2013 will run from January 22 until February 7 and will feature their famous 2-for-1 offer.  Hurry up and buy your tickets because these shows are flying off the shelf fast.  Here is the full lineup of shows for Broadway Week in New York:

Annie
Chicago
The Heiress
Jersey Boys
The Lion King*
Mamma Mia!
Mary Poppins
The Mystery of Edwin Drood
Newsies
Nice Work If You Can Get It
Once
The Other Place
The Phantom of the Opera
Picnic
Rock of Ages
Rodgers & Hammerstein’s Cinderella
Spider-Man: Turn Off the Dark
Who’s Afraid of Virginia Woolf?
Wicked*

Broadway Week is one of the best deals that you will find anywhere in the world, so you should probably take advantage of it.  Visit the official Broadway Week website to get your tickets.

Last year, I spent a weekend in Arizona with some friends from college.  I flew from Philly to Phoenix on a five hour flight, and I forgot my iPod.  It was the worst.  It didn’t make things easier that I was making my cross country trip on the 10th anniversary of the September 11th terrorist attacks.  Everyone in the airport was on edge and a nice playlist would have made things much easier on me.

This is just how I am.  Music makes everything better in my mind.  I don’t know what I would do without my headphones when I hop on the 1 train for my daily, morning commute.  I’m sure for some of you, this doesn’t entirely register, but many of you are just like me.  We need music.

A couple of summers ago I took an even longer flight; this time from Newark to Heathrow in London.  For this journey, I made a special playlist on my iPod.  It was full of songs about London, and England, and Europe and songs by Englishmen.. It was all about my trip, and it put me in the perfect mood.

This got me thinking about our guests.  Many of you travel great distances to visit New York City and enjoy our tours.  With that in mind, I decided to make a playlist in hopes that it makes your travel a little bit easier.

Last Friday, we asked you on Facebook what your favorite New York themed song was, and your response was not very surprising.  At least it wasn’t surprising to me, because the two songs that were mentioned are, in my mind, songs 1 and 1a about NYC.  Frank and Jay-Z.  Old school and new school.  The Theme from New York, New York and Empire State of Mind. 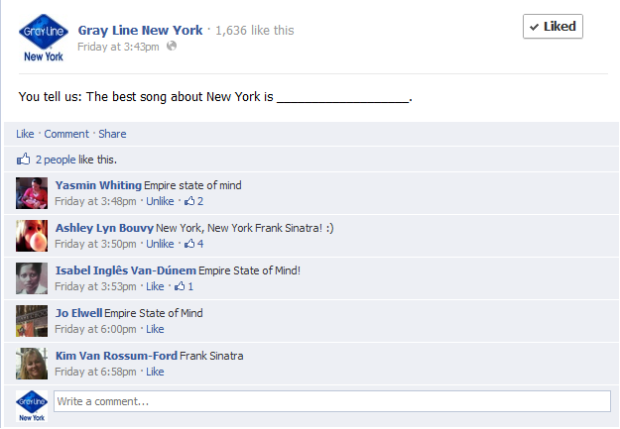 But while those are probably the two most popular New York based songs, there are literally hundreds of others.  Our Spotify playlist consists of 46 songs, from Elton John to The Rolling Stones; from Beastie Boys to Wu-Tang Clan.  The list includes songs from each of the past 9 decades, with the oldest tune being ‘Rhapsody in Blue’ (1924).

The criteria for choosing songs were simple: Each song is either about New York, or has a strong connection to the City.  (For example: I know Bruce Springsteen’s ‘My City Of Ruins’ was originally written about Asbury Park, NJ, but when it was performed at the 9/11 telethon, it immediately became a song about New York, too.)

There are two important things to still point out about this list.  First is that some of the songs on the playlist have very explicit lyrics.  I just couldn’t justify a New York playlist that didn’t include Jay-Z.  Don’t worry; I plan on making a censored playlist for those of you who would like one.

The second thing is that this playlist isn’t complete.  In fact, it never will be.  If there is a song that you would like to see added, let me know.  Post it in the comments here, write it on our timeline on Facebook or Tweet at us @graylinenewyork.